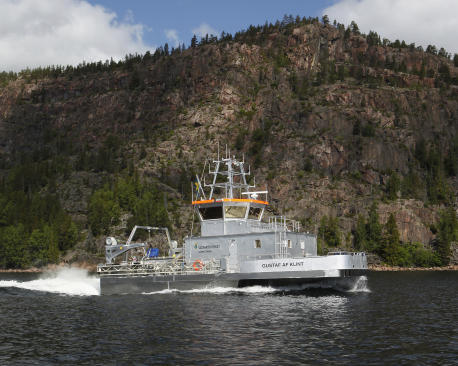 Newbuilding No. 580 from DOCKSTAVARVET has now been delivered to SMA, the Swedish Maritime Administration, The ship is named GUSTAF AF KLINT after a pioneer  in Swedish hydrographic survey active about 1790 to 1840.

The ship is very specialized and will mainly work with so call ”clear sweeping”. Dockstavarvet has built three predecessors in the 1970ties and thus have previous experience of the method. The sweeping is done with a 30 meter steel beam which is hinged in a winch system athwardships across the stern of the ship. The beam is then moved at slow speed at a preset depth and registers any contact with objects on the bottom. With this method the minimum depth in areas were the demand for accuracy can not be met with conventional multibeam echosounding will be fully established. ”Clear sweeping” is mainly conducted in fairways and harbor areas.

In certain cases the maximum draft of ships can be allowed to increase up to 0,5 meters with great savings in shipping costs.

The ship is built as a trimaran, completely in aluminum and measures 17,6 x 8,6 meter. Propulsion is by one VOLVO-PENTA diesel of 558 kW via a TWIN-DISC MGX-5204 gearbox with trolling function giving only 25 rpm on the propeller at dead slow. Thrusters of 75 kW each are installed both forward and aft in order to enable the ship to sail on a straight line independent of wind an current up to certain limits. The thrusters and the complete winch system for handling of the beam are electrically powered from a 250 kW VOLVO-PENTA genset.

In addition to the normal navigation- and communication systems the ship is fitted with an exhaustive electronics installation for registration of signals from the sensors on the beam and the beam winches as well as position- and depth data. Totally there are about 50 sensors and antennas, about 20 computers with presentation on some 10 monitors. Sweeping is normally conducted while going forward but when working for example against a dock wall it can be done going astern. All equipment in the wheelhouse for maneuvering, navigation, communication and handling of the sweep system is mounted on a platform including two seats for the bridge team. When working in the astern mode the platform is simply turned 180 degrees within the octagonal wheelhouse. However, the main parts of the computer systems are mounted in a separate server room with it’s own fixed fire fighting installation and air condition.

The main deck level of the deckhouse contains a workshop and a stores room for survey equipment and mess room, pantry, toilet/washroom and berths for the crew. The aft deck is fitted with an A-frame lifting 1500 kg for handling of the workboat, a ROV and/or a 10’ container.

The windlass, the A-frame, the sensor- and winch system for the beam and the entire control system for main engine and thrusters is designed and delivered by PETTERS MARINE HYDRAULIC. The system contains functions for six different modes;

Conventional maneuvering with rudder and propellers, Joystick mode, Keep Position = fixed on one spot, ”slow speed track” while sweeping at speeds up to 2 knots, ”high speed track” in speeds up to 8 knots for multibeamsounding and transit mode on auto pilot.

The sensor and maneuvering systems have a complex integration with the SMA systems for position fixing and registration of depth data which are processed onboard and sent by data-link to the SMA head office in Norrköping.

”NB 580 is a very specialized one-off project. We can hardly count on a repeat order in the short term but we have learned a lot more about system integration and electric drive installations” states the CEO of DOCKSTAVARVET, Mr. Anders Hellman.